Urban Meyer will not appear on ESPN today. This fuels even more speculation that he’s returning to college football as the new head coach at Ohio State.

Meyer was supposed to work as a studio analyst all day from Bristol, Connecticut. In previous weeks, he has called college football action, or assisted College GameDay on location.

“Urban Meyer won’t be appearing on ESPN this weekend,” said ESPN spokesman Josh Krulewitz. “He requested off his studio assignment and we obliged.” 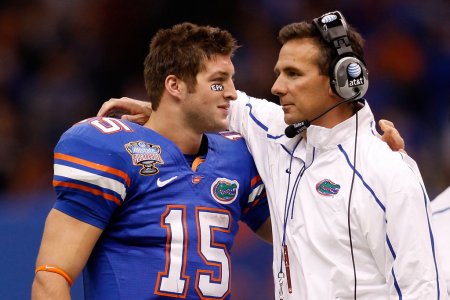 Meyer has denied reports that he’s been offered the Buckeyes’ head coaching job. Yet, he’s not the only coach that has denied a coaching position in the past, then eventually get hired by the school.

Brian Kelly, when he was the Cincinnati head coach, denied that he was being offered the Notre Dame job. He eventually called it his dream job when he was hired by the school.

Nick Saban, when he was the Miami Dolphins head coach, denied that he was being offered the Alabama job. He eventually left the Dolphins for Alabama and has won a National Championship at Alabama since becoming head coach a few years ago.

Meyer has been offered a 7-year, $40 million dollar deal. He is expected to be announced as the Buckeyes head coach next week.