Kris Humphries was recently labeled as the least liked player in the NBA. But the New Jersey Nets still like him, no matter what Forbes reported. 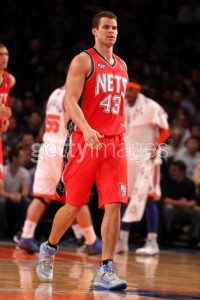 He can now focus on basketball after an crazy few months. Months ago, he got married to celebrity Kim Kardashian, which only lasted 72 days.

Kardashian has had Humphries head all over the place, as she has a pending divorce. But he’s trying to annul their marriage, as Kardashian refuses to give back his $2 million engagement ring.

But back to basketball, which he was able to return to last night. Last season, he averaged 10 points and 10.4 rebounds per game, as well as shooting 52.7% from the field.

“I’m excited to be back,” said Humphries. “It’s good to see the guys again. Although it’s a one-year deal, I’m happy and motivated. I think if you ask any player, they all would want a max contract with the longest terms. But I’m happy with the deal and glad to be back.”

©2011 The Capital Sports Report. All rights reserved. Please honor copyright! Piracy hurts writers, devalues their works, and puts you and your employer at risk of lawsuits. All original materials contained on this website are protected by United States copyright law and by the Creative Commons License, and may not be re-produced, distributed, transmitted, displayed, published or broadcasted without the prior written permission.

Creative Commons License
Anthony Caruso III by The Capital Sports Report is licensed under a Creative Commons Attribution-NonCommercial-NoDerivs 3.0 United States License. Based on work at www.thecapitalsportsreport.com