Bill Curry has decided to retire after this season. 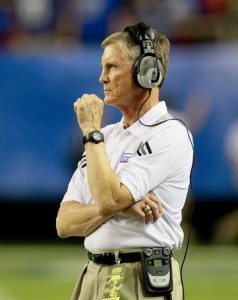 Georgia State will be moving to the FBS level next year, but Curry will not be apart of the move. They will move into the Sun Belt Conference after playing this season as a member of the CAA Football division.

“The opportunity to start a football program at a university that I love, in my hometown, and the privilege to coach these young men has been one of the highlights of my career,” Curry said. “This has been a labor of love, but after this season, it will be the right time to step away from coaching. I am blessed with good health, but I am ready to move on to other things in my life and devote more time to my wife, Carolyn, and our children and grandchildren.

“I’ve said all along that I will fulfill my contract, and I intend to do that,” he continued. “I am completely committed to coaching this season, and I’m energized by this team and the enormous challenge ahead of us.”

He took over the Georgia State program in 2008, as it took two years to build the program. Their first game was in 2010.

© 2007-2012 The Capital Sports Report. All rights reserved. All the articles and photos contained on the website are protected by the US Copyright law and may not be re-produced, distributed, transmitted, displayed, published or broadcasted without the prior written permission. The Capital Sports Report and its logo are official trademarks of Anthony Caruso III and Anthony Caruso Enterprises.