Boston Red Sox pitcher Daisuke Matsuzaka came to America as one of the top pitchers in Japanese baseball history. 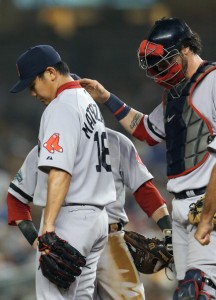 Now, he is likely going back to Japanese, as one of the worst pitchers in Red Sox history. After 6 seasons, he has finished with a 4.52 ERA, which is the 4th-worst in Red Sox history with a minimum of a 100 starts.

He gave up five runs over six hits and two home runs in 2 1/3 innings on Wednesday. He received the loss in the Red Sox’s 14-2 loss to the New York Yankees.

He is expected to head back to Japan for the final years of his career.

© 2007-2012 The Capital Sports Report. All rights reserved. All the articles and photos contained on the website are protected by the US Copyright law and may not be re-produced, distributed, transmitted, displayed, published or broadcasted without the prior written permission. The Capital Sports Report and its logo are official trademarks of Anthony Caruso III and Anthony Caruso Enterprises.