Matt Barnes, the Los Angeles Clippers forward, has been in an incident a time or two in his long NBA career.

This time, on Wednesday night, he got into a shoving match with Oklahoma City Thunder center Serge Ibaka on Wednesday night at the Staples Center in Los Angeles on ESPN. But Barnes wasn’t involved in the play when he went toe-to-toe with the taller Ibaka. 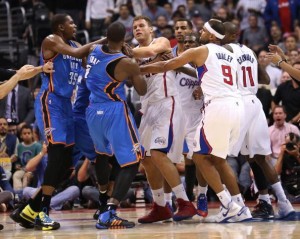 Shoving match between the Thunder and Clippers (Getty Images)

After the rebound, Griffin would pin Ibaka’s arm to his body and pulled him backwards. Ibaka would twist out of the move and then swing at Griffin.

That’s when Barnes got involved, as Ibaka missed Griffin with the swing and shoved Barnes. All 10 players on the court got involved in a scuffling match, before the refs had to attempt to keep the piece.

It took seven minutes for the game officials to determine the fouls by each team. Ibaka and Barnes would get ejected, while Griffin would get a technical foul.