Derrick Ross has been running wild on his opponents since coming into the Arena Football League in 2011.

In just four seasons, Ross has become the all-time rushing leader and the first player to ever reach 2,000 rushing yards in a career. He finished the game with 2,001 yards at the end of the game on Saturday night. 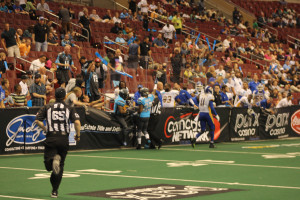 Ross ended the game with three carries for 13 yards. Yet, that was good enough for the Boss to reach the historic plateau.

While the record is a nice milestone in his career, Ross is not focused on it.

The Philadelphia Soul were able to defeat the Tampa Bay Storm, 62-34, last night at the Wells Fargo Center.

The Soul have now won back-to-back games, and improved to 5-4 on the season. The Storm; however, have dropped four straight with the loss and dropped to 3-7.

The game was busted open when the Soul scored three touchdowns in the third quarter. The Soul opened the third with 28-27 lead, then as the quarter ended, the score increased to 49-27.

“The defense came up huge to begin the second half,” Soul head coach Clint Dolezel said. “Our defense came up with two stops and two scores minutes into the third quarter, and I was pleased with the way they played.”

The Storm scored their lone second-half touchdown when B.J. Hall hit Joe Hills for a 7-yard touchdown seconds into the fourth quarter. Then, the Soul scored when Fred Shaw scored a 6-yard kickoff return and followed that up with a Dan Raudabaugh to Ryan McDaniel 3-yard touchdown.

Joe Hills had two first half touchdowns for the Storm thrown by B.J. Hall. His first touchdown reception was for 20-yards, while the second was for 11-yards. Hall also added a 3-yard rushing touchdown.

Rod Issac picked off Soul quarterback Dan Raudabaugh for a 7-yard interception for a touchdown.

McDaniel had two first half touchdowns, both for 4-yards. V’Keon Lacey also added a 4-yard touchdown, while Anthony “Tiger” Jones opened the game with a 10-yard touchdown.