Del Worsham is in his second season back as a pilot of a Funny Car in the NHRA Mello Yello Drag Racing Series. He is the full-time driver of the DHL Toyota Camry Funny Car.

Two weeks ago, Worsham had his best performance of the season, as he went to the final round against Cruz Pedregon at Old Bridge Township Raceway Park in Englishtown, New Jersey. Pedregon went 4.126 seconds over Worsham’s 4.189 seconds.

Following the win, Pedregon gave Connie Kalitta, the owner of Kalitta Motorsports, which includes the DHL Toyota Camry Funny Car, the wally after winning the event. Six years prior, Kalitta’s son Scott was killed in the DHL Funny Car in a horrific accident at the same track.

One has to go all the way back to the 2009 season when Worsham last won a race in a Funny Car. In that event, he defeated Tim Wilkerson, as Del went 4.091 to Wilkerson’s 4.179 seconds. This was one of three wins for Worsham in Funny Car that year.

“I would just like to win,” Worsham said. “I really believe that we’re a good enough team to win a race, so this can be a fulfilling move. I truly believe this is the right move either way. I’m racing with my friends, and I know them well. Last year, we made the Countdown (to 1), which is an accomplishment in itself. There are more than 10 cars that deserve to be in the countdown. That’s the biggest accomplishment that we made all season. A win is what we need right now.”

Now, he has a better chance of winning, as a driver than he had two years ago when he retired following the 2011 season. After retiring, he became the crew chief for Alexis DeJoria, who credits Worsham as her mentor, during her rookie season in 2012 in the Tequila Patron Funny Car.

As a rookie, DeJoria had a 7-20 win-loss round record. In back-to-back races, she finished as a runner-up when she lost to Ron Capps in Bristol, before losing to Courtney Force in the semi-finals in Chicago.

“There was a lot of mixed emotions going on there,” Worsham added. “I made a decision in 2011 to get out of the car when I announced my retirement. I thought we did a fairly good job in her rookie season, than when this got presented to me at the end of 2012, I went to my family right away and thought about it. There’s unfinished business for me in Funny Car. I wanted to give it one more shot, so I made the move. I had been out of Funny Car for a few years, so I had to get back in the groove of things.”

He replaced Jeff Arend in the DHL Toyota Camry Funny Car. In a series of moves when Worsham was named a Funny Car driver once again, Arend was released from Kalitta Motorsports and Tommy DeLago left Matt Hagan’s Funny Car team at Don Schumacher Racing to lead DeJoria’s tuning efforts.

While he may have left her team as a crew chief, he is not far away actuality. See, Worsham and DeJoria are teammates for the two-car Kalitta Motorsports Funny Car family.

“She was plenty of ready and we’re still teammates,” Worsham acknowledged. “When she needs advice, she’s more than welcome to come over to me here at DHL and talk to me. There have even been times that I went to her for things, as teammates, like tendinitis on the track. She’s more than a capable driver, and she’s well on her way of doing great things.”

This season, John Force Racing has dominated the Funny Car division with four wins by Robert Hight and a win each by John Force and Courtney Force. In addition, DeJoria has two wins and Pedregon won the last race. 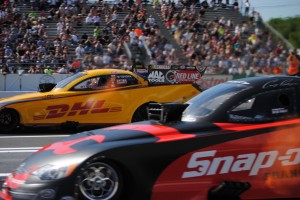 “It’s tough,” Worsham said. “To win in the NHRA Mello Yello Funny Car category, Jack Beckman was the 2012 champion, and he had zero wins last year. I wouldn’t judge her driving by her wins. I would more so judge her by the driving she does – like the fans should judge all drivers. She has put herself in the position to win more frequently with the wins early this season. Now, it’s time we get the DHL Toyota Camry in the winner’s circle.”

Worsham came back to Funny Car to win a Championship, which is eluding his career. Three years ago, he drove the Al-Anabi Racing Top Fuel dragster to eight wins and the Championship, winning back-to-back for Alan Johnson’s team, as Larry Dixon won in the same championship in 2010.

He has primarily been a Funny Car driver in his 24-year career.

“I would be so proud and honored to win a championship in Scott’s car,” Worsham added. “That is the ultimate goal for all of us. I’m representing Scott by driving this car, and I’m hoping that Scott and Connie are happy with this decision.”

While he is back as a driver, he’s not certain how long he’ll be driving the car.

“I don’t even want to begin to say how long I’ll be in this car,” Worsham admitted. “I don’t know if it’s going to be 2-years, 3-years, 5-years. We’ll do a couple of years at a time, and see how things go from there.”