Hector Arana Jr. is the Pro Stock Motorcycle provisional No. 1 qualifier following his 6.876 at 195.48 mph at the NHRA Carolina Nationals at zMax Dragway. Steve Johnson, who claimed the final Countdown to the Championship spot two weeks ago, went 6.893 at 193.77 for the second spot.

“This means a lot as far as my confidence goes,” Arana Jr. said. “It’s all about confidence. I know I have the equipment to take me to the winner’s circle, but confidence is the key.” 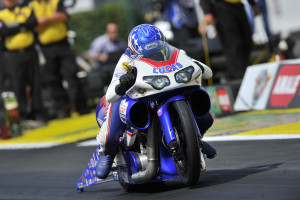 Shawn Gann, Michael Ray, and Hector Arana did not make the show on Friday night. These three drivers have two more rounds to make the show tomorrow, or they will be heading home early.