Nets PG Deron Williams is dealing with soreness in his ankles

Posted on November 3, 2014 by Anthony Caruso III Leave a comment

Brooklyn Nets point guard Deron Williams still has soreness in his ankles. He added that he isn’t dealing with pain, just soreness sometimes.

He said this has been a lingering injury, as it has been bothering him since last season. He has played in 40 minutes per game in the first two games of the season. 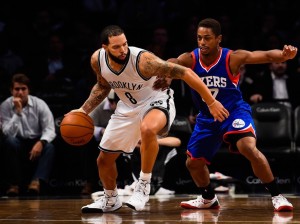 While he has been at most entire games, he has been struggling to shoot the ball. He has went 13 of 35 in the first two games.

“I think it’s just rhythm,” he said. “I don’t really want to talk about what’s going on. As long as I’m out there playing, I’m playing. That’s all that matters.”

He is averaging 17 points per game in the two games with 2.5 rebounds and 7.0 assists.