Posted on December 8, 2015 by Anthony Caruso III Leave a comment

There will be a new World Heavyweight Champion in boxing, as current champion Tyson Fury was stripped of his IBF title. He won the belt in a shocking win over Wladimir Klitschko less than two weeks ago.

Fury rejected the IBF’s mandatory challenger fight with Vyacheslav Glazkov in his next fight. Instead, he will fight Klitschko in a rematch that will take place in early 2016. 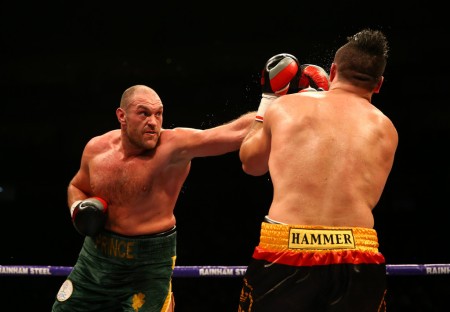 The 27-year-old was the first person to defeat Klitschko in nearly a decade. He defeated the long-time champion on points on Nov. 28th.

Fury has not lost in his 25 professional fights. He’ll retain the WBA and WBO Heavyweight Championships.

When Klitschko lost in shocking defeat, he was adamant there was going to be a rematch.

“There will be a rematch. It is still early and I have to process things but there will definitely be a rematch,” Klitschko said after the loss. “I couldn’t show my full potential at any time. This is what I want to change in the rematch — and I will. Failure is not an option.”