“This is the situation, where the league is discussing this morning, they’re talking about a one-game suspension,” Schefter said. “He was fined for hitting somebody (already this season) and earlier this year, the league has ruled in the Aqib Talib case, where he was suspended a game after he poked a Colts players’ eye.” 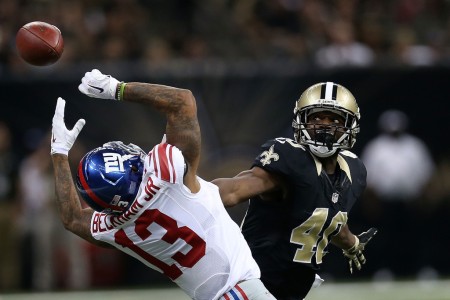 Beckham Jr. was not ejected for a helmet-to-helmet hit on Norman, and it wasn’t a great athletic performance between the game. They were more combative towards each other than anything else.

“No offensive player has ever been suspended by the NFL for a helmet to helmet hit,” ESPN’s Kevin Negandhi wrote on Twitter. “That could change today w Odell Beckham Jr.”

The Giants star was very immature in his actions, and he clearly snapped in the game. Norman got the best of him, as he’s done with the other star wide receivers in the league, and Beckham Jr. took it personally.

If it is indeed a one-game suspension, he’ll miss the Giants game on Sunday Night Football against the Minnesota Vikings in Minnesota. It’ll also likely cost the Giants their season, as the team needs a miracle to win a playoff berth.

According to Cris Carter on ESPN’s Mike & Mike show, Carter said something was said during warmups from Norman that set off Beckham Jr. He did not reveal what was said, but he said he talked to Beckham Jr. last night.

Norman when asked by Carter about something happened before the game, he said, “I have no comment.”