Reports: Tennis player Gabriella Taylor may have been poisoned

Posted on August 11, 2016 by Anthony Caruso III Leave a comment

According to media reports, Gabriella Taylor may have been purposely poisoned at Wimbledon in July. The claims are now being investigated by the authorities.

Taylor withdrew in the middle of her quarterfinal match due to what was considered a “mysterious illness.” Whatever it was, it prevented the 18-year-old from playing the rest of the match. 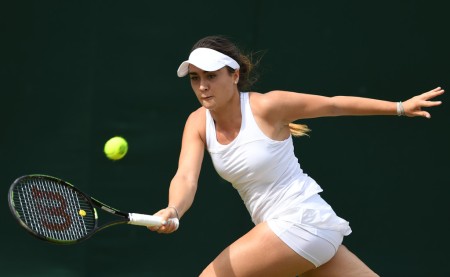 Gabriella Taylor with the forehand at Wimbledon (Getty Images)

They reportedly began investigating last week, as they believe she was poisoned, which would keep her from playing again in the tournament. After leaving her match, she then spent four days in intensive care.

While in the hospital, doctors discovered that she was given a strain of Leptospirosis. This is a rare bacteria, which is usually given to animals, and could be fatal.

“The allegation was received by officers on August 5 with the incident alleged to have taken place at an address in Wimbledon between July 1-10. The victim was taken ill on July 6. It is unknown where or when the poison was ingested,” a spokesman said.

“The victim, an 18-year-old woman, received hospital treatment and is still recovering.”

Maybe with this case moving forward, they could finally say who poisoned her. The Daily Telegraph in the United Kingdom says she may have been targeted by “crime betting syndicate.” However, there’s also rumors that it could have been a coach or another player, who could have been the one, as well.

This could be a several week to months case to find out what really happened to her. No arrests have been made at this time.

“The bacteria the infection team found is so rare in Britain that we feel this could not have been an accident,” her mother, Milena Taylor, told the paper.

“Her bags with her drinks in were often left unattended in the players’ lounge and someone could have taken the opportunity to contaminate her drink.”