Ewing — The College of New Jersey’s football team was shutout on Senior Night. The Lions were defeated by the Rowan Profs 17-0 at Lions Stadium on Friday night.

The Lions (2-8) were shutout for the third-time this season. Their loss also snaps their two-game win streak that they brought into the contest. 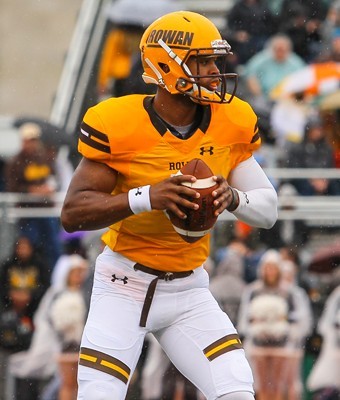 After a three-game losing streak, the Profs ended their season on a high note. They ended their campaign with a 6-4 record.

TCNJ also needs to decide the future of interim head coach Rocky Hager in the coming months. If they decide to go in a new direction, then they’ll bring in another head coach.

Hager took over for former head coach Wayne Dickens, who decided to retire in the spring. He moved to San Diego, Calif.

“I don’t know what’s going to go on,” Hager said. “I told them that I don’t know if I will have the privilege of being their head coach. I do appreciate what they’ve done. I’m proud of them. We played darn hard every game all season long. They should be proud of that. We need to make a commitment that the things that we can improve on, we’ll work hard to get the improvements made.”

Trevor Osler had a 109 yards and two interceptions. Chad Scott — against his former team — had 88 yards, including a 39-yard gain. Jeff Mattonelli had 31 receiving yards.

“Honestly, I just came into it like any other regular season game,” Scott said. “I wanted to stay focus and stay with the plan. I didn’t want it to be a distraction. It was a tough loss, but we’ll build off of this for next season.”

All of the Profs points came off of turnovers. Osler had two interceptions and a lost fumble, while Chase Vena also lost a fumble.

“I have to give their defense credit,” Hager said. “They threw some things at us that I don’t think we were prepared for. They have some of their health back — and we didn’t anticipate seeing a couple of guys on the field. And that makes them a better football team. They have some talent. We’re not that far off. Obviously, with it being 17-0, I felt like we had a decent couple of things. Every one of their points came off of our turnovers and on the defense where we didn’t tackle well, or we had an assignment error. And that’s on me.”

Pinckney gave the Profs a 17-0 lead with 23 seconds left in the third quarter. He hit Jamel Smith for a 30-yard touchdown on the three-play drive.

With 46 seconds left in the first half, Tyler Knighten made a 22-yard field goal.

Pinckey also hit Kevin Lenart for a 29-yard touchdown in the first quarter.