According to the Minnesota Vikings, head coach Mike Zimmer is having emergency eye surgery on Wednesday night. It’s not clear at this time if he’ll coach against the Dallas Cowboys on Thursday night.

“I have met with the coaches and players and we have a contingency plan in place if Mike is unable to coach against Dallas,” Vikings general manager Rick Spielman said. 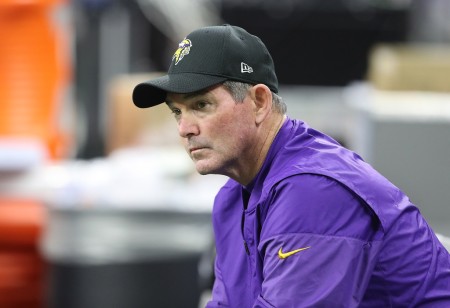 Spielman will give an update on Zimmer’s condition at 11 am EST on a conference call.

Zimmer has been the Vikings head coach since the 2014 season. They’re 6-5 this season and are facing the 10-1 Cowboys on Thursday Night Football on NBC.

The Vikings won five straight games to begin their season. Then after their bye week, they have won just one game — which came on Nov. 20 against the Arizona Cardinals.

They’re 1-5 in their past six games. If Zimmer can’t coach, Pat Shurmur may be named interim head coach.

Shurmur was the interim head coach for the Philadelphia Eagles to end last season and guided the team to a win over the New York Giants. After Chip Kelly was fired, he took over.