Instead, it turned into a layup line and a photo-op for the now CBS broadcaster against the Denver Nuggets.

“I told him what I was going to do and said, ‘Fine me if you don’t like it,” Cuban told reporters of the conversation with Silver. “Anybody who thinks a layup line is disrespectful hasn’t watched an NBA game. We’ve got people shooting half court shots at every break, we’ve got kids for ball boys … We’re entertainment. And if they’re so self-important they can’t recognize that, it’s on them. Not me.” 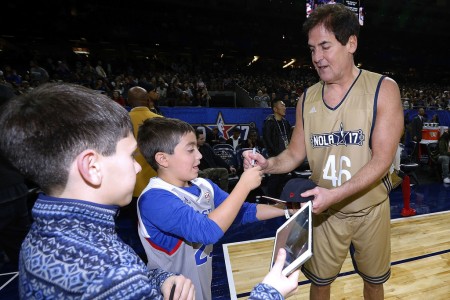 Prior to the game, the Mavericks claimed DeAndre Liggins off of waivers. As a result, this meant Romo would not be able to see any playing time.

“Signing him and stuff like that, would have been too much for a lot of reasons,” Mavericks head coach Rick Carlisle said. “No. 1, he’s a football athlete that’s not ready to play in an NBA game. That’s very risky.

“No. 2, to sign a guy with all of our requirements from a physical standpoint with the hours and hours of screening and all that kinds of other stuff, it just wasn’t worth going there. And that’s not really what this is about.”