The College of New Jersey Lions dropped a big game at home against the No. 24 Wesley College Wolverines on Saturday. The Wolverines won 33-0 at Lions Stadium.

The Lions fell to 0-3 on the season. Wesley improved to 1-1 in their campaign. 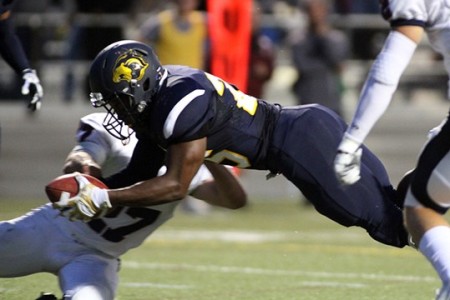 The Lions received the ball to start the game. The offense was forced in a three-and-out in quick order, setting the precedent for the game. Senior quarterback Trevor Osler was heavily pressured the whole drive and the offense could not get much of anything going. Wesley managed to block the punt on fourth down, only adding insult to injury.

The Lions defense; however, held fast and limited the Wolverines to a 34-yard field goal attempt that missed wide right. The momentum from the stop and missed field goal did not translate back to the offense, which for the second-time went three and out. The difference this time, the Lions managed to get a pretty solid punt.

Wesley, in quick order, took the ball down field and punched into the end zone with an authoritative running game that would cause the Lions trouble the entire game. Wesley; however, struggled to make the extra point, striking the left upright deflecting the ball back to the offensive line, hitting a player on the helmet.

On their third drive, the Lions started moving the ball more consistently. The offensive line still struggle to run the ball at any capacity, but senior running back Khani Glover showcased his acting abilities faking a running back drive that fooled the entire defense, allowing Osler to hit a wide receiver screen to gash the Wesley defense. But, yet again the Lions stall at the Wolverines 39-yard line.

With a finessed punt, the Lions managed to pin the Wolverines back on their own 10-yard line, but to no avail as the Wolverines drove the ball 90-yards on three-plays to punch it into the end zone in less that a minute and ten seconds. The Lions fans booed and fell silent as Wesley climbed out to a 13-0 lead towards the end of the first quarter. The only positive to come from the drive is a touchdown saving tackle that senior Alshamiere Fields, where he chased down Wesley sophomore running back E.J Lee after he had ran for 76-yards. The tackle would be for naught, though, since the Wolverines punched it in two plays later on a vicious buck sweep run to right.

“I think they are coming along. Obviously, there is progress to be made,” Goff explained. “We have to continue to get better on both sides of the ball. I still think its a matter of learning new systems and the terminology. If we are going to have any success, the guys up front have to get it done. We have to continue to improve.”

“Well, they were what we thought they were going to be,” Cowperthwait commented. “They were strong kids, quick of the ball and their ranked whatever they were ranked for a reason. We have to be better on pass protection and be more physical up front.”

“There’s no denying they are a good team,” Signora added. “They have a lot phenomenal athletes out there, but we can’t let that be an excuse for a poor performance. We have to go back and look at the film to fix the problems for upcoming weeks, so we can keep getting better.”

The Lions had their opportunities to score during the game. Right before halftime, the Lions offense drove down the field and was threatening in the red zone. They threw the ball twice, one to sophomore Vincent Guckin, who had the ball in his hands in the end zone for a split second before the defender ripped it out. The second time, the ball sailed out of bounds.

After Osler took a punishing sack, they went for it again right before the clock ran out. Osler delivered a strike to his receiver’s outside shoulder, but the defender managed to make a play on the ball for the defensive stand.

Though, the Lions were shutout in the game, the team fought hard throughout the entire game. They kept their heads up after the game as well. Goff spoke about his teams performance.

“If we go out and execute, god, if we go out and tackle, this game would be different,” Goff said. “If our kids had the confidence to make plays against a team like this, we could put ourselves in better positions… We’ve made some personnel changes. A big part is that some people have come back from injury… Today we had guys in positions that we have to make plays. We have to get back to fundamentals.”

The Lions fall to 0-3 on the season, but they have shown heart so far this year. They have face off against Salisbury University next Saturday, September 23rd, at noon on their home field. Goff expressed confidence in his team and their ability to jump back into the grove of things. Only time will tell.

Any Corrections?. You can contact Anthony Caruso III, Publisher at publisher@thecapitalsportsreport.com.