While The College of New Jersey Lions ultimately lost this week’s game to the Montclair Red Hawks, it was in spite of the miraculous efforts of wide receiver Thomas Koenig, who had his best game of the season with a 181 yards after coming off a hot performance in the Week 4 game against the Salisbury Sea Gulls.

In the first play, immediately after the Lions intercepted what would have been a touchdown for the Hawks, quarterback Trevor Osler connected a pass that Koenig managed to run down for 80 yards and a touchdown. 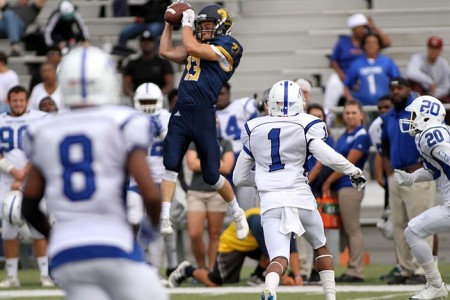 “Tommy Guns has got some speed,” Osler said. “He’s a great player, we’ve been playing together for a long time, it feels like forever, but it’s just been four years… he played a heck of a game, we should have had it.”

Koenig continued this dominance throughout the game. He connected with Osler for a 7 yard touchdown, bringing them up to 14-0 before they were halfway through the first quarter.

“When my number’s called, I just gotta make the play,” Koenig said. “I trust all the guys around me, we just got to keep that momentum for the whole game. We’ll start getting some W’s down the stretch.”

The Lions started to lose the momentum in the second quarter, but kept their lead, 17-7. In the third quarter; however, it evaporated after two touchdowns from the Red Hawks. The Lions attempted to make a comeback in the fourth quarter, and on the back of short passes from Osler to Koenig the final drive hit end zone territory.

“I know they have faith in me,” Koenig said. “It’s a good feeling when everyone has faith in you and I have faith in everybody else, that could be anybody out there. We just gotta punch it in at the end.”

Koenig ultimately completed 10 receptions for 181 yards, on top of the two touchdowns in the first quarter. It’s a great indicator of talent when a wide receiver can do double duty in driving the ball down the field as well as act as a bonafided red zone threat, and the Lions head coach Casey Goff was as enthused as one would expect about the performance Koenig put on.

“We felt that was a match-up that we could take advantage of and Tommy did a hell of a job,” said Goff. “We missed him on a couple of tightly contested balls, but we felt like he could be a presence [on Saturday] and he was. He’s a hell of a ball player and we’ve got to continue to take advantage of him.”

Unfortunately, the would-be-final touchdown was intercepted in the end zone, an unfortunate turnaround for the Lions, while Koenig found himself stonewalled in the end zone. Speaking on the topic, Goff was confident they could adjust to increased coverage on their star wide receiver.

Any Corrections?. You can contact Anthony Caruso III, Publisher at publisher@thecapitalsportsreport.com.