Free agent head coach Chip Kelly will have to make a tough decision in the coming days. He’ll have to chose where he’ll want to coach next in his coaching career.

Kelly will have to decide between the Florida Gators and the UCLA Bruins. The Bruins recently fired their head coach Jim Mora Jr. on Sunday. 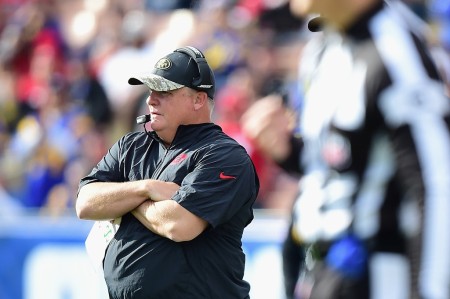 The Gators parted ways with their head coach Jim McElwain back in October.

Kelly met with the Gators on Sunday, as several members of the Florida administration flew to New Hampshire to meet with the coach. UCLA officials met with Kelly on Tuesday.

The 53-year-old has been away from the game for a season. Yet, despite being away, he’s reportedly still cashing checks from the San Francisco 49ers, who reportedly will pay him $60 million over the lifetime of his contract with his team.

He reportedly could not become a coach during the season, because then he would forfeit the $5 million he’s getting from the 49ers to sit out.

Kelly was the spent the 2016 season with the 49ers and spent the previous three-years prior with the Philadelphia Eagles. Prior to going to the NFL, he was a successful college coach with the Oregon Ducks.

The Bruins have only claimed one national championship in its history, which came in 1954. The Gators, who play in the Southeastern Conference, have three to their history, all three coming in the past 25 years.

Kelly also reportedly wants a hefty salary from whichever school he choses. According to sources, he wants to be one of the highest-paid coaches in college football, reportedly around $9 million per season.

That would be the highest paid salary given out by these two schools. Former Gators head coach McElwain was the 15th-highest paid coach, according to USA Today Sports’ College Football Salary database, at $4.45 million per season.