On Thanksgiving night, the Ole Miss Rebels and the Mississippi State Bulldogs face off at Davis Wade Stadium in the Egg Bowl at Starkville, Miss. The game will be on ESPN at 7:30 pm EST.

The Rebels are 5-6 record. They are not eligible for a Bowl game this season no matter how they did due to a self-imposed postseason ban penalty.

The Bulldogs, already bowl eligible, have an 8-3 record. 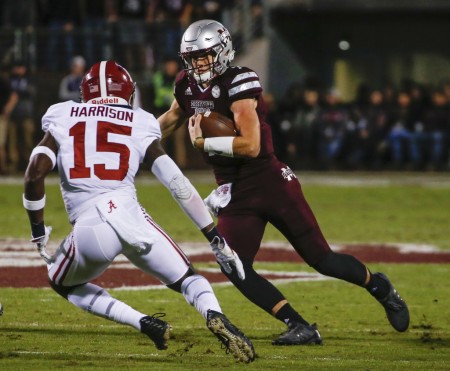 Mississippi State won last year’s meeting with a 55-20 score. Prior to that, Ole Miss had won two straight.

Since the 2007 season, each team has won five times.

Ole Miss lost its last game, as they lost 31-24 to the Texas A&M Aggies. They haven’t won since November 11th when they won 55-22 against the Louisiana-Lafayette Ragin’ Cajuns.

Mississippi State won its last game, as they won 28-21 over the Arkansas Razorbacks, which was also the final game for Bret Bielema as their head coach. The Bulldogs haven’t lost since November 11th when they were defeated 31-24 by No. 1 Alabama Crimson Tide.

Shea Patterson, who is out for the season, leads the Rebels with 2,259 passing yards. He also had 17 touchdowns and nine interceptions before suffering his season-ending injury.

Jordan Wilkins leads the rushing attack with 901 yards. He also has seven touchdowns.

A.J. Brown leads the Rebels receivers with 1,085 yards. He has 10 touchdowns.

Nick Fitzgerald leads the Bulldogs with 1,770 passing yards. He has 15 touchdowns and 10 interceptions.

Fitzgerald also leads the rushing attack with 968 yards. He also has an additional 14 rushing touchdowns.

Keith Mixon leads the receivers with 275 yards. He also has a touchdown.