Miami Marlins slugger Giancarlo Stanton will not waive his no-trade clause to join the San Francisco Giants. He reportedly told the franchise on Thursday. 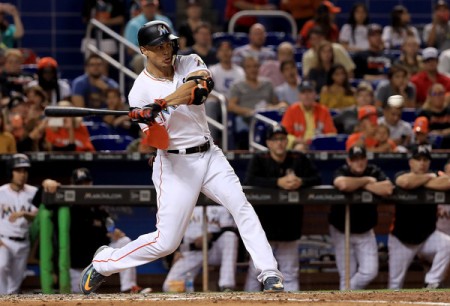 Both the Giants and the Cardinals have previously agreed to the framework of an agreement with the Marlins. However, Stanton has the final say on if he’ll accept a trade or not.

The Giants and Cardinals — if no agreement is made with Stanton soon — could look at other alternatives on the free agent market. Stanton could also decide to just accept a trade to the Cardinals and all this drama would be over.

Stanton has spent his entire career with the Marlins. Despite signing a 10-year extension with the team prior to the new administration took over, led by former New York Yankees legend Derek Jeter, the new leaders want to rid themselves of his $325 million deal.

Stanton is considered one of the best young players in the game.

The 59 home runs were a Marlins record. However, it’s still shy of the asterisk record of Barry Bonds. Some still consider that Roger Maris record with 62 is the true record.