Ewing, New Jersey — The College of New Jersey men’s basketball team lost for the first-time at home this season. The Lions were defeated 93-84 by the Rowan Profs on Wednesday night at Packer Hall.

The Lions fell to 16-5 on the season with the loss. They are 11-3 within the New Jersey Athletic Conference. 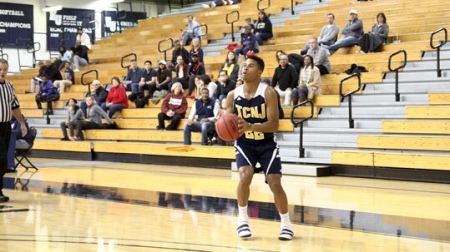 Ramapo, who the Lions defeated in January, leads the NJAC with a 12-2 record. They are 16-5 overall.

TCNJ is now tied with the New Jersey City University Gothic Knights with 11-3 records in conference play. The Gothic Knights are 17-4 overall, while the Lions are 16-5.

NJCU and TCNJ split the season series. Each team won on their respective home courts.

Rowan improved to 10-11 on the season. They are 6-8 within the conference.

The Lions have a tough matchup with the Roadrunners on Saturday. This game could potentially decide the conference and who plays where in the upcoming NJAC Tournament.

“Playing against the No. 1 team in the conference, you shouldn’t need an excuse to play hard,” Lions head coach Matt Goldsmith said. I think we’ll be ready on Saturday. I have confidence in the guys to be ready, physically and mentally. It is up to us as a staff to get a good game plan and make sure our legs are ready for Saturday. I hope they respond — and I think they will.”

TCNJ came out flat to begin the game. After the first 10 minutes, they then began and got the game close near halftime.

“I thought we had learned from a couple of other flat performances, but we obviously haven’t,” Goldsmith said. “It was really disappointing in general. It was a lack of energy, lack of communication… Nothing we talked about regularly was happening on the floor. It led to the loss obviously. I told them I do not care about wins and losses, but I care more about us playing hard. If we play hard and we take a loss; then we take a loss, but if we don’t, then I have a problem with that.”

The Lions got the game within one point late in the second half before the Profs pulled away for the win.

DaRon Curry led the Profs with 20 points. He also had six rebounds and one assist.

“He was really getting whatever he wanted for them,” Goldsmith said. “He was going to the basket all night. He’s really quick; he was getting free throws. He’s a good finisher at the rim. All the credit to him, he did a great job, but I felt like we could have done a better job with our help-side defense.”

He was one of five Rowan players in double-figures. Besides Curry, Ramon Wright had 19 points, TJ Booth added 18, while Nick DePersia contributed 12 points.

Austin Kearney came off the bench and scored 14 points. Rowan had 23 bench points.

Eric Murdock Jr. led the Lions with 21 points. He also had three rebounds and five assists.

He was one of four TCNJ players, who scored in double-figures. Niall Carpenter and Randall Walko had 14 points each.

Ryan Jensen came off the bench to score 11 points. TCNJ had 25 bench points.