Infinite Hero Foundation Funny Car pilot Jack Beckman is the Funny Car provisional No. 1 qualifier after Friday’s qualifying at the NHRA Arizona Nationals at Wild Horse Pass Motorsports Park in Chandler, Arizona. Beckman will try to pick up his first No. 1 qualifier of the season on Saturday should his numbers hold up. 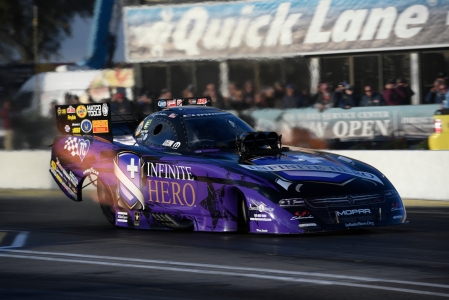 Jack Beckman (Photo by the NHRA)

“We got one point for being third quickest of the first session which I thought was great, but then to come back and back that up, we actually tied Courtney [Force] for low E.T. and got it on speed,” Beckman said. “I like the fact that we were able to make back-to-back runs like that.”

Beckman is a three-time winner of the Phoenix event.

“When it’s this cold, the track gets so tricky,” he said. “People always think colder means better, and it is to a point, but then it kind of tips over and the track gets so cold that the window for hitting that good run just gets really small.

“Usually if you have conditions like this you say ‘we won’t race in these conditions.’ Those hero runs on Friday night are kind of a throw away of data for crew chiefs because you won’t see those conditions again, but I think we’re going to see them tomorrow and again on race day. What makes me feel confident is we have great data that we’ll probably be able to use again in the next two days.”