Harlow-Sammons Pro Stock driver Chris McGaha picked up his first Wally of the 2018 season. He defeated Jason Line in the final round to win the NHRA Arizona Nationals at Wild Horse Pass Motorsports Park in Chandler, Arizona.

This is the second straight race that Line has advanced to the final round. However, like Pomona, Line also lost, as his teammate and reigning Pro Stock champion Bo Butner won. 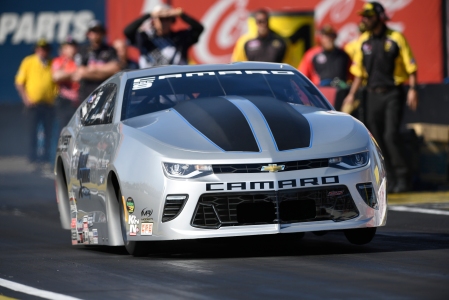 Chris McGaha (Photo by the NHRA)

McGaha went 6.529 at 211.59 mph to win the final round. This is his sixth career win, but his first win since the Four-Wide Nationals in Charlotte, N.C. last year.

“We picked up some power this offseason that we’ve been looking for, but when we went No. 1 in the first round of qualifying, we knew we had something that could complete,” he said. “It’s really satisfying to do this as a one-car team, and it’s really special to get our first win of the year.”

McGaha is now third in the Pro Stock points with 152. Line is the leader with 195, while Deric Kramer is second with 154.

“When you race people like Jason [Line], you have to bring your ‘A-Game’ because he’s good at what he does,” McGaha said. “When my crew chief and my team give me a good car, it’s kind of like a field goal kicker. He sits there on the bench the whole time and then he has to come out and win the game, so it’s kind of like you feel like as a driver — don’t mess it up because you’re the last guy.

“This win is absolutely satisfying. We’re the one little car from Odessa, Texas and we had some issues and we addressed them before the finals and I think that’s why we picked up. We can credit my crew chief Adam Hornberger for that; I just try not to mess it up.”