New York Yankees closer Aroldis Chapman throws one of the fastest pitches in all of baseball. Many of his flame-throwing pitches are coming at the batter at over 100 mph.

Most people would be scared of a 100-plus mph fastball coming at them. If they were in the batter’s box with Chapman, they may just run away. 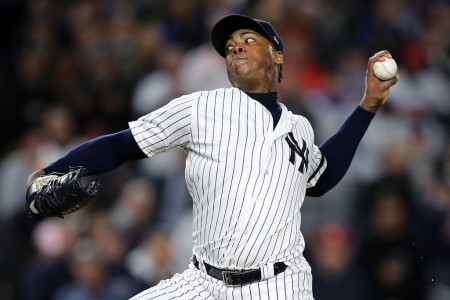 However, Major League Baseball players are trained to face the heat coming at them — and not be scared.

Tampa Bay Rays prospect Jake Cronenworth recently got hit by a Chapman pitch in Wednesday’s exhibition game. He was hit in the ribs by a 98-mph Chapman fastball, which left a welt afterwards.

The welt that Cronenworth is dealing with will likely need several days to heal. When his Minor League season starts, his manager is going to have to keep an eye out on him.

The 24-year-old shortstop last played for the Montgomery Biscuits. He played in 38 games at the Double-A level, where he had .285 batting average with one home run and 20 RBIs.

Getting hit by Aroldis Chapman in the ribs leaves a mark. pic.twitter.com/RaAQ9TTdSe