Both times, the Warriors won. They defeated the Houston Rockets, 101-92, on Monday night at the Toyota Center in Houston, Texas. 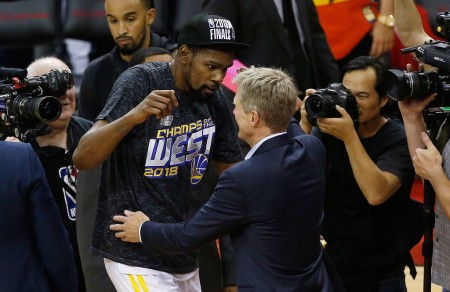 For the fourth straight year, the Warriors will be playing in the NBA Finals. They will host the first two games of The Finals against the Cleveland Cavaliers, beginning on Thursday night.

This is the fourth straight time these two teams have played each other in The Finals. Golden State holds a 2-1 advantage over Cleveland going into their fourth meeting.

Golden State has led throughout all the meetings. They won in 2015 in six games and last season in five games. However, in 2016, they held a 3-1 advantage, before Kyrie Irving and LeBron James guided the Cavaliers back to a Game 7 victory.

The Warriors won both regular-season games against the Cavaliers this season.

Golden State held Houston two five straight games below 100 points. The Rockets had 106 in the first game, then 127 in Game 2. After that, the most they scored was 98 points in Game 4.

The Warriors needed to dominate the second half of the past two games. In Game 6, they outscored the Rockets 64-24.

Kevin Durant led the Warriors with 34 points. He also had five rebounds, five assists, three blocks, and one steal.

KD was one of four Golden State players, who scored in double-figures. Stephen Curry had 27, while Klay Thompson, despite being in foul trouble, had 19, and Draymond Green had 10.

James Harden, who refused to shake hands with the Warriors after the loss, led the Rockets with 32 points. He also had six rebounds, six assists, one block, and four steals.

Harden was one of four Houston players, who scored in double-digits. Eric Gordon had 23, while Clint Capela added 20 and P.J. Tucker contributed 14.

The Rockets had just three bench points. Those game from Gerald Green on a three-point basket.