Schumacher is holding off reigning Top Fuel champion, Brittany Force, for the top spot. The U.S. Army Racing driver has not won a race in more than one year. 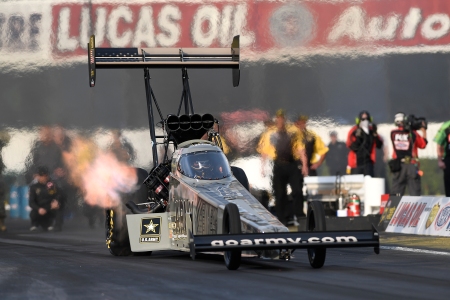 Tony Schumacher racing earlier this season (Photo by the NHRA)

The Monster Energy sponsored pilot, who resides in Yorba Linda, California, went 3.808 at 324.75 mph for the provisional No. 2 spot.

Amalie Oil sponsored Terry McMillen is the provisional No. 3 qualifier. The Elkhart, Indiana native went 3.816 at 323.81 mph in his dragster.

FireAde sponsored Leah Pritchett is the provisional No. 5 qualifier. The Danville, Indiana native went 3.830 at 320.05 mph.

There are only 15 Top Fuel dragsters, who everyone will make the show. As a result, despite not recording a time, Bill Litton, the La Jolla, California native, who is racing in the Worsham Family’s dragster, will still race.

With there being limited cars, the winner of the No. 1 qualifier later today will receive a bye in the first-round of eliminations on Sunday. Even though the driver will receive a bye run, they will still have to lay down a good pass in order to see if they can get lane choice for the second round.