It was a special day for Tony Schumacher. Not only was it Father’s Day, but it was a day that it snapped a long winless streak.

Schumacher, the pilot of the U.S. Army Racing Top Fuel Dragster, won the
Fitzgerald USA NHRA Thunder Valley Nationals at Bristol Dragway in Bristol, Tenn. on Sunday. The win snapped a winless streak going back to the Gatornationals in Gainesville, Florida in March 2017. 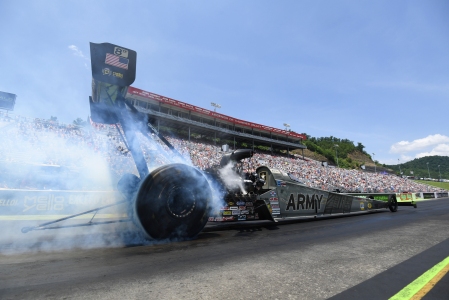 This was also his first win under crew chief Mike Neff. He replaced Mike Green in the off-season.

Schumacher defeated Mike Salinas in the Scrappers Racing team in the final round. Schumacher went 3.946 at 313.58 mph.

“We have had little things bite us this season, but we knew we had to overcome adversity and we knew we had a great car that was capable of winning,” Schumacher said. “I’m proud of my team for sticking to our plan, and I know our team is going to be a factor for the rest of the season.”

Salinas, who was appearing in his first final round appearance on Father’s Day in front of his four daughters, went 5.251 at 152.18 mph.

Schumacher was 2-0 against Salinas in prior rounds in his career. Yet, this was the first time they faced each other in the final round.

Schumacher had the starting line advantage. He went straight down the track in the groove and never trailed.

Schumacher has won six times at Bristol, including snapping a longer streak at the facility years ago. This is the most wins by a Top Fuel Dragster pilot at the track.

Salinas had trouble early, as he went up in smoke. He then attempted to pedal it, before clicking it off.