The New York Mets are no longer contending for a playoff spot this season. As a result, the team is looking to deal several assets.

Jeurys Familia is one of the players available in a trade. The Oakland Athletics are close to acquiring the right-handed pitcher. 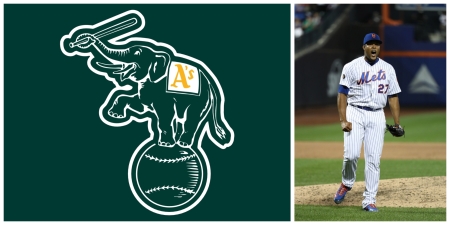 Nothing is finalized yet, as of this post. However, ESPN’s Buster Olney says that a deal is being finalized with the Athletics.

It is not clear yet who Oakland is giving up in the deal.

The 28-year-old Familia is actually having a good season, despite his team’s struggles. This season, he is 4-4 with a 2.88 ERA along with 17 saves.

Familia will make $3 million for the rest of the season. According to The Athletic’s Ken Rosenthal, the Mets are sending some money to the Athletics to cover his deal.

Familia has been with the Mets for the past seven seasons, including an All-Star appearance in 2016.

The Athletics have one of the best bullpens in the American League — and it would get even better with the addition of Familia. Presently, they have the seventh-best ERA at 3.50.

Familia will be a free agent at the end of the season. He’s making $9.3 million this season.