Marcin Tybura will face Stefan Struve in a heavyweight bout at the UFC Fight Night 134 at the Barclaycard Arena in Hamburg, Germany. The fight will be a part of the main card action on FOX Sports 1 beginning at 2 pm.

Tybura comes into the bout with a 16-4 record. Of the decisions, he has seven knockout wins, along with six submission wins. He also has won three fights by decision. 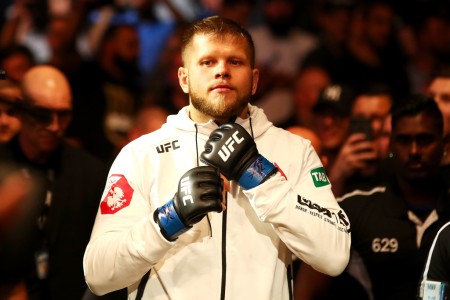 Marcin Tybura prepares to walk into the Octagon against Fabricio Werdum in Sydney, Australia on November 19th, 2017.

The 32-year-old Uniejow, Poland native has not won a fight in more than one-year, as he defeated Andrei Arlovski at UFC Fight Night 111 by a unanimous decision on June 17th, 2017. When he defeated Arlovski, he was on a three-fight win streak.

When he has lost, he has either been knocked out or it went the distance, before losing.

Struve has a 28-10 MMA record. He has 17 decision wins, along with eight knockout wins. He also has two decision wins, while also having a DQ win over Murat Bourekba on February 5th, 2006.

Like Tybura, Struve is coming into this bout on a two-fight losing streak. He lost to Arlovski by a unanimous decision on March 3rd, 2018 at UFC 222. Then, he lost to Alexander Volkov by TKO (punches) at UFC Fight Night 116 on September 2nd, 2017.

The 30-year-old Beverwijk, North Holland, Netherlands native has not won a fight since he defeated Daniel Omielanczuk at UFC 204 via submission (Brabo Choke) on October 8th, 2016.

Struve has lost seven fights by knockout. He also lost two more by decision and another by submission.