Peak-sponsored Duane Shields had to come to Atco Dragway to face Tiffany Januik for the first-time. Yet, both are from Nevada, as Shields resides in Boulder City, Nevada, while Januik is from Las Vegas, Nevada..

Shields defeated Januik in the first-round of eliminations on Saturday afternoon in the NHRA Lucas Oil Drag Racing Series at Atco Dragway. Shields went 5.405 at 274.44 mph, while Januik went 5.509 at 263.46 mph. 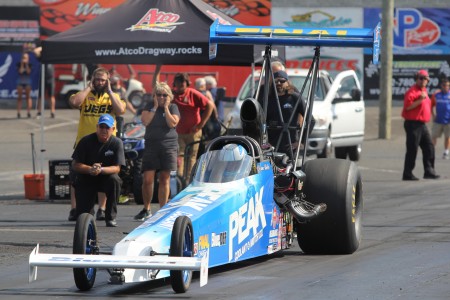 This loss also snapped a streak of Page advancing to back-to-back final rounds in 2016 and 2017 at this facility. He lost both times to Josh Hart.

Hart defeated former NHRA Top Fuel pilot Doug Foley in the first-round. The Ocala, Florida native went 15.017 at 65.10, as he had trouble leaving the line, as well. Yet, Foley, also had trouble and crossed the center line and received a disqualification.

The second round of eliminations are coming up. Top Alcohol Funny Car begins at approximately 6:30 pm EST and Top Alcohol Dragster will follow.