The Dallas Wings have fired head coach Fred Williams. Taj McWilliams-Franklin will take the team over on an interim basis for the rest of the season.

The team lost 93-80 on Sunday against the Washington Mystics in Washington, D.C. with the loss, they fell to 14-17. 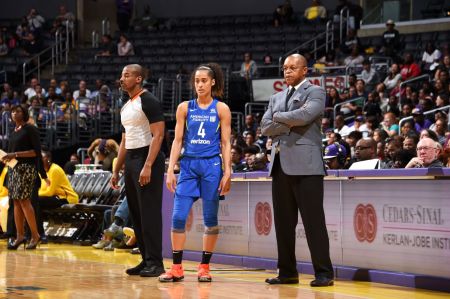 The Wings are presently 5th in the Western Conference. The loss to the Mystics was the team’s eighth straight loss.

Following the game, Williams got into an altercation with the team’s CEO Greg Bibb. After the altercation, Williams was terminated.

“Following today’s game, I made the decision to change direction in regards to our head coaching position,” Bibb said in a release on Sunday. “I felt this move was necessary. The season has not met our expectations. I have asked Taj to serve as our interim head coach and I have the upmost confidence that she and our staff will do everything possible to put us in the best position to win. I wish Fred the best moving forward. Our focus remains on qualifying for the playoffs and ultimately competing for a WNBA championship.”

The Wings have not won a game since July 19th. Williams blamed his emotions in the exchange with Bibb on the team’s struggles as of late.

“Typical, when you’re in a drought,” Williams told media when asked about what happened post game. “You have some emotional things going. Just have to sometimes let things go and regroup and just find a way to get a ‘W.’ I think we’ve put a destination on what we want to do, and we’ve got a few more games to play and the main thing is getting into the tournament.”