A Brazilian soccer player, who was evading capture since an October kidnapping, has finally been caught. He was arrested on Wednesday during his team’s game.

Marlon Natanael de Lima Alexandre, 21, is a player for the Sapucaiense team in the Campeonato Gaúcho Second Division, was approached by the law enforcement authorities, as he sat on the bench. He had four outstanding warrants, including one for his alleged involvement in a violent kidnapping. 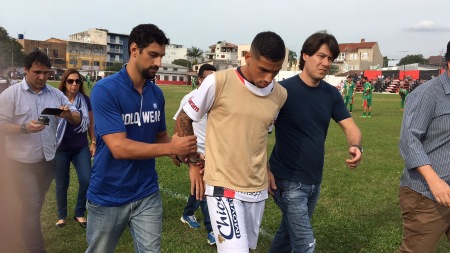 The attackers, including Alexandre, kidnapped a 67-year-old woman at gunpoint outside of a local mall in October. The attackers, then used her credit cards — and charged an alleged about of $1,400 in charges.

The law enforcement authorities were not able to capture the soccer player until they received a tip that he was a player on the team.