The San Diego State Aztecs face the Army Black Knights on Saturday afternoon in the Lockheed Martin Armed Forces Bowl. The game will kick off at 3:30 pm on ESPN from Amon G. Carter Stadium in Fort Worth, Texas. 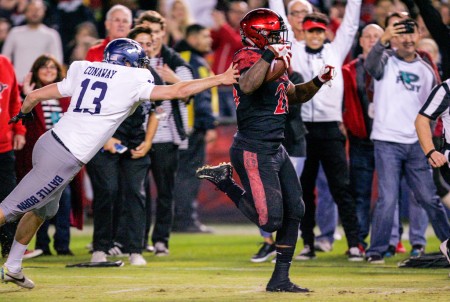 This will be the third all-time meeting between the two teams. San Diego State leads the series with two wins.

The Aztecs have an 8-7 all-time record in Bowl games. They have won their last two Bowl games over the Cincinnati Bearcats and the Houston Cougars.

San Diego State is 3-3 under head coach Rocky Long. They have not long a Bowl game since a 17-16 loss to the Navy Midshipmen in the San Diego County Credit Union Poinsettia Bowl on December 23rd, 2014.

Army has a 4-2 all-time Bowl record. Like San Diego State, the Black Knights have won their past two Bowl games.

This will be their third straight Bowl game in the Dallas, Texas-area. This is their second game in the Armed Forces Bowl, which they also played in during the 2015 Bowl campaign.

San Diego State has won their last four regular-season games. They have not lost a game since a 27-3 loss to the Fresno State Bulldogs on October 21st, 2017.

Army won their last game, as they defeated the Midshipmen, 14-13, in a thriller in the snow in Philadelphia, Pennsylvania on December 9th, 2017. They have not lost a game since they were defeated 52-49 to the Mean Green on November 18th, 2017.

Christian Chapman, Aztecs quarterback, has gone 140 of 233 for 1,848 passing yards. He has 13 touchdowns and three interceptions.

Rashaad Penny, who led college football in rushing, had 275 carries for 2,027 rushing yards. He also had 19 touchdowns.

Mikah Holder leads the receivers with 43 receptions for 602 receiving yards and two touchdowns.

Ahmad Bradshaw, Black Knights quarterback, has gone 13 of 40 for 279 passing yards. He had one touchdown and two interceptions.

Bradshaw leads the rushing backs with 210 carries for 1,566 rushing yards and 12 touchdowns. Kell Walker has five receptions for 111 yards.