Whether you’re street racing or racing at a track, there’s always the risk of something going wrong. Most of the time nothing ever happens, but you never know when it is going to affect you. 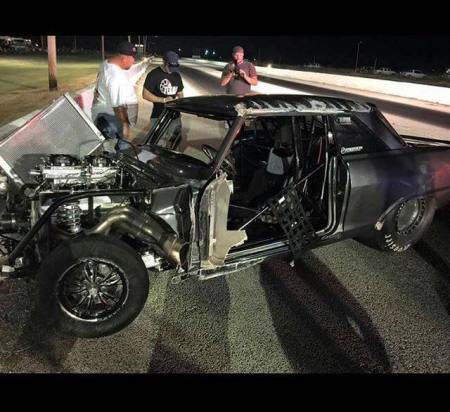 Daddy Dave was driving his newest creation, “Goliath,” which may not have debuted on the show yet. This recent show was reportedly taped in 2014.

There are reports that Comstock is currently in an Amarillo, Texas hospital in stable condition.

We reached out to Derek Travis, who we’ve previously done stories on, and he said that he has no idea when the new season will air. With the damage to his car, it may have to take another season off, it wasn’t already featured on the new upcoming Street Outlaws show.

Eyewitness reports said that Comstock had problems very early on, as he lost control of his beast, before crossing over into the other lane. His car then turned on his side and barrel-rolled numerous times, and even struck the wall.

These same eyewitness reports said that he was transported from the track via an ambulance.